Several long-term or permanent methods of birth control are available. These are best for women who do not want to become pregnant in the near future (or ever). These methods work well, mostly because the woman does not have to remember to do anything on a regular basis. 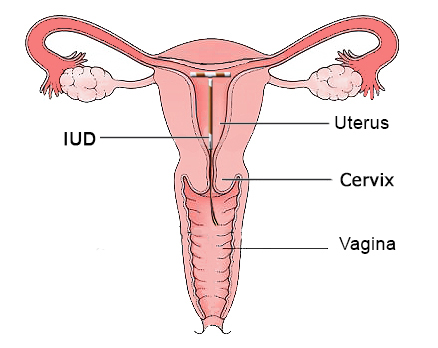 Mirena® Progestin-Only Intrauterine System also commonly known as an IUD is inserted into the uterus by a health care provider.

Mirena® is a hormone-releasing IUD that releases small amounts of a progestin hormone called levonorgestrel locally into the uterus. Mirena® lasts for up to 5 years.

The IUD prevents pregnancy by interfering with the movement of the sperm inside the uterus and the progestin prevents some women from ovulating (releasing an egg) at all, thus preventing the possibility of pregnancy.

The progestin in this IUD also decreases the amount of menstrual flow and cramping. Women experience irregular bleeding patterns for the first 3 months after insertion and often have a significantly decreased flow and cramping once their body adjusts to the IUD.

How effective is it at preventing pregnancy?
The IUD is more than 99.5% effective and prevents pregnancy for up to five years. The IUD does not provide protection against sexually transmitted infections (STI’s).

Who should use it?
Women who want to decrease the amount of bleeding and cramping during their periods, do not desire a pregnancy for an extended period of time and want the convenience of not having to do anything on an ongoing basis.

Skyla® Progestin Only IUD is inserted into the uterus by a health care provider.

Skyla®, like the Mirena®, is a hormone releasing IUD that releases small amounts of a progestin hormone called levonorgestrel locally into the uterus. Skyla® prevents pregnancy for up to 3 years.

This IUD thickens your cervical mucus, inhibits sperm movement, reduces sperm survival and thins the lining of your uterus. These actions work together to prevent pregnancy.

How effective is it at preventing pregnancy?

Skyla® is more than 99% effective at preventing pregnancy for up to three years. The IUD does not provide protections against sexually transmitted infections (STI’s).

Who should use it?

Women who do not desire a pregnancy for an extended period of time and want the convenience of not having to do anything on an ongoing basis. Skyla® is slightly smaller than Mirena®, making insertion more comfortable for younger women and women who have not had children.

What is it?
Paragard® IUD is a T-shaped copper-releasing device inserted into the uterus by a health care provider. The IUD works by interfering with the movement of the sperm inside the uterus. Sperm die within the uterus before they can fertilize the egg. The IUD may increase the amount of bleeding during your period and increase menstrual cramping.

How effective is it at preventing pregnancy?
Greater than 99% effective and prevents pregnancy for up to 10 or more years. The IUD does not provide protection against sexually transmitted infections (STIs).

Who should use it?
Women who want to avoid hormonal methods of birth control, do not desire a pregnancy for an extended period of time and want the convenience of not having to do anything on an ongoing basis.

NEXPLANON
What is Nexplanon?
Nexplanon is a form of birth control. It is a small, plastic rod about the size of a matchstick
that is inserted under the skin of your upper arm. The implant releases a hormone called progestin,
which prevents ovulation. It also thickens the mucus in your vagina to prevent sperm from entering
your uterus.

What is Nexplanon used for?
Nexplanon protects against pregnancy for up to 3 years. Although it can stay in place for up to 3
years, it may be removed at any time. Once a Nexplanon is removed, it is possible for you to get
pregnant very soon after removal. If you wish, another Nexplanon can be inserted when you get a
current one removed.

What happens during the procedure?
Your provider will clean your arm with antiseptic solution and then inject some numbing medicine.
She will then insert the Nexplanon under your skin on the inside of your upper arm. You may feel
some pressure or mild discomfort during the procedure. The procedure only takes about 10 minutes.

To remove Nexplanon, your provider will clean and numb your arm. She will make a small incision
near the site of the implant and then locate and remove the implant. A new Nexplanon can be
inserted at this time. Nexplanon must be removed on or before the 3-year mark.

What are the risks?
• Bruising and swelling where the Nexplanon was placed
• Pain or discomfort at the site of placement
• Scarring of the skin
• A small risk of infection
• Difficulty retrieving the Nexplanon at time of removal
What should I do to prepare for the procedure?
• Do not have unprotected sex for 2 weeks before you get the Nexplanon placed.
• Come to your appointment with a full bladder so you can take a pregnancy test before
the procedure

Tubal ligation, or having your “tubes tied,” is a common form of surgical sterilization. The fallopian tubes are the passageway for the egg to travel from the ovary to the uterus. This is where the egg becomes fertilized by the male’s sperm prior to traveling to the uterus. In tubal sterilization, the fallopian tubes are either cut then separated or they are sealed shut. This prevents the egg and sperm from meeting and thus prevents pregnancy. It is a surgical procedure that is performed at the hospital under general anesthesia.

How effective is at preventing pregnancy?

Who should use it?

Women who do not want to bear children or have completed child-bearing. A tubal ligation can easily be performed with a cesarean section.

© 2022 Women's Group of Northwestern. All other trademarks are the property of their respective owners.